To sum up the 100th Celebration Alumnae Reunion feels almost impossible. It’s hard even a week later to come up with the words to describe the overall feel and impact of the weekend. It was truly incredible.

On Friday afternoon, we welcomed 615 alumane from across the world (with alumnae traveling from as far as California, France, Spain, and more). While some of these alums had recently been to camp, for many it had been decades. One alumna hadn’t been back through the gates of Greystone in 54 years! Friday afternoon’s arrival was filled with hugs, laughs, and happy reunions. 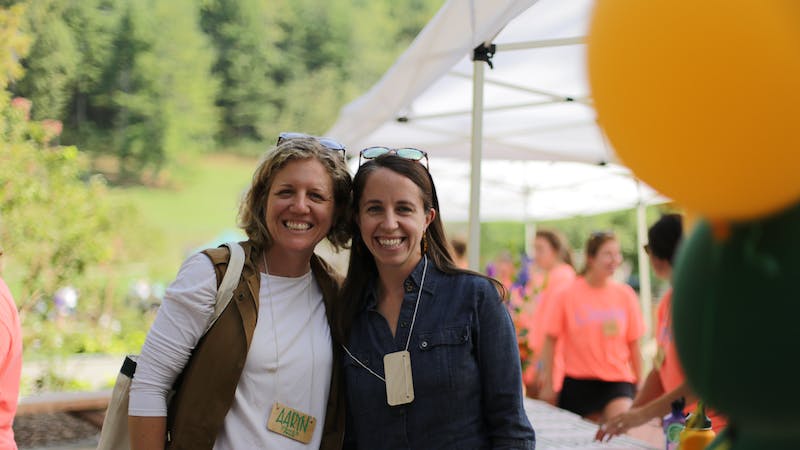 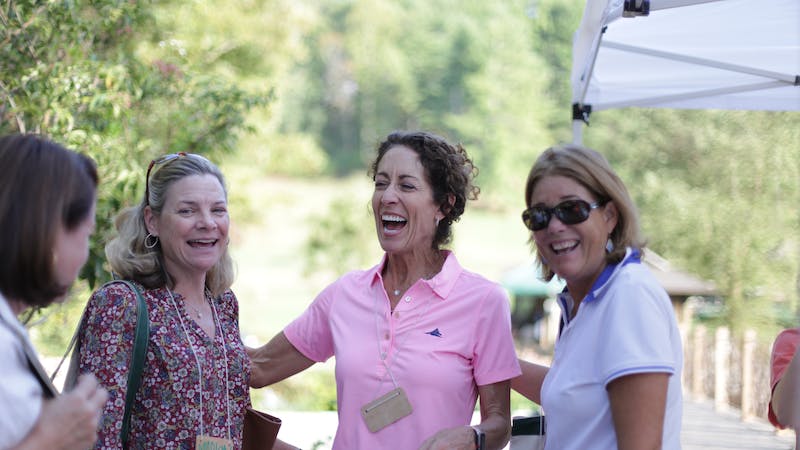 After arriving and checking in for the weekend, alums moved into their cabins and then reconvened at the Shepherd’s Gazebo for a welcome reception. The alumnae snacked on wonderful appetizers, gave even more hugs, and were enjoying themselves so much that they couldn’t hear the bugle for the flag ceremony that followed!

Our staff color guard led us through the flag ceremony as Jimboy welcomed the alumnae back to camp. The alums ranged in age from 25 - 92 years old. To see all of those generations circiling the flag pole was truly breathtaking.

The weekend continued with a Corn Roast style BBQ dinner down at the Blob dock. After moving all of the gymnastics equipment out of the gym and setting up numerous picnic tables near the blob, alumnae had plenty of room to feast on a fabulous dinner and enjoy each other.

S’mores, a photobooth, a bluegrass band, and fireworks topped off the night, as alums laughed with old camp friends. For many, it may have been years and years since seeing a particular camp friend, but for all, it felt like picking up right where you left off…the magic of a camp friendship!

With slightly overcast and drizzly skies, Saturday morning kicked off with a traditional breakfast in the Dining Hall, including ham and apples, grits, and homemade biscuits. Many alumnae found themselves at a loss for words when the singing began. Seeing that many Greystone girls from that many generations singing the same words to the same songs brought many to tears.

Jimboy finished breakfast with a traditional Breakfast Club and a Retailing Spirits after Midnight joke before everyone moved to the Pavilion for Morning Assembly. Singing a mix of older and newer songs, alumnae then enjoyed hearing from Heather Brown Holleman in a short devotion to jumpstart the day.

After Morning Assembly, the real fun began. Alums had the opportunity to enjoy camp activities, many of which they had not tried in years! From High Ropes to fishing to print making to party barge rides, these alumnae acted like campers for the day, enjoying some of their favorite pastimes. With a gourmet taco bar picnic lunch to refuel, it made for a perfect camp day.

One of the favorite parts of the day was seeing camp “greats” participate in the activity they loved, and excelled in, while at camp. The very best of the camp paddlers raced in a war canoe race, the tennis champions from generations past played in a Waves tournament on the courts, the campers who brought Greystone Groove to camp led the class, and archery and riflery cup winners competed for the best targets.

Alumnae also enjoyed relaxing activities throughout the day, as they explored the many camp archives on display. Finding old cabin photos and newsletters brought much joy and laughs! The alums also received their 100th Celebration book and many spent the afternoon purusing Greystone’s history. 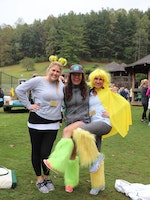 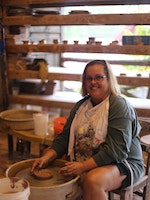 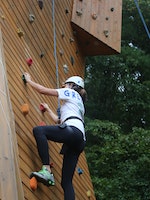 As the day wound down, alumnae grabbed a quick shower before regrouping on the Pageant Court for decade pictures and a reception. From there, groups entered the transformed Dining Hall to find their seats for Banquet.

The celebration began in the traditional way. After a prayer, alums belted out Hail Greystone Hail, sang the toast songs to both Mrs. Hanna and Libby, and then ended with an unpracticed, but perfect, Felix clap.

Alumnae feasted on prime rib and enjoyed both lemon and chocolate stacks for dessert. The night ended with toasts, recognitions, an update on camp, the Goodnight Song, and then finally, the reading of the scores (the combined scores from 100 years of team competition). 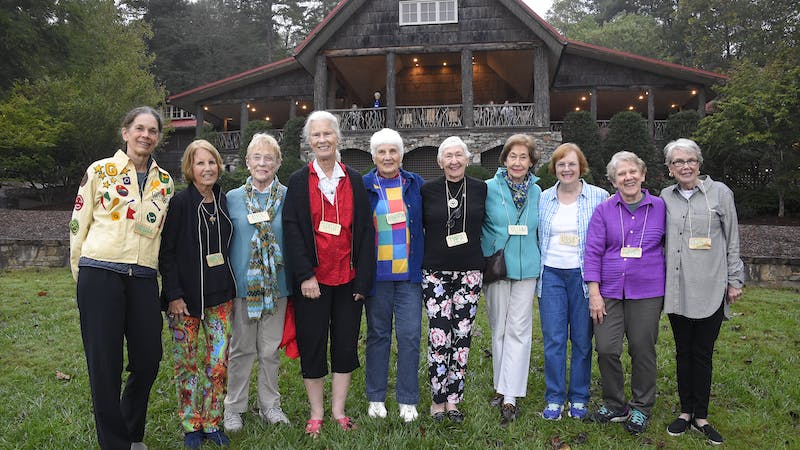 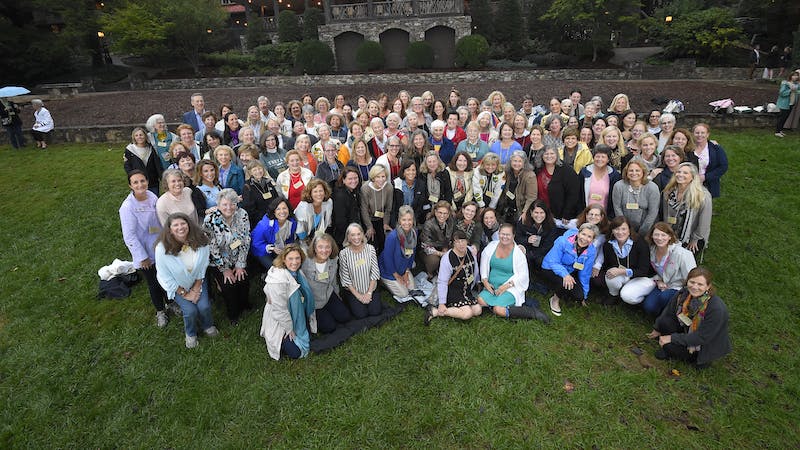 Saturday night ended with a special Vespers service, which started by circling the flag pole and holding each candle high. Alums then moved down to the lake to float their candles on the water, sending their light out into the world.

From the sentimental to the crazy, the gears shifted quickly (much as they do at camp), as we moved into our Reunion Talent Show. Many acts that haven’t been seen in decades were brought back on stage to thunderous laughs.

The final morning began with a buffet breakfast followed by a church service with Terrell Glenn. It was so very special to welcome Terrell and his family back to Greystone, as he served as Greystone’s first summer-long minister in the 1990s, spending weeks at camp with his family.

After a wonderful worship service, alums gave tearful hugs and bid each other goodbye, many already planning get togethers with camp friends in the near future.

Our alumnae made the weekend so very special, and these pictures don’t begin to show the true magic of the Reunion! If you haven’t seen our recap video, it is a good place to start to even better understand the experience. Alumnae, thank you for a fabulous weekend, and we look forward to seeing you again soon! 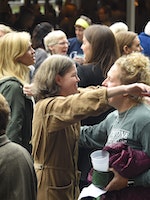 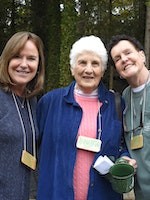 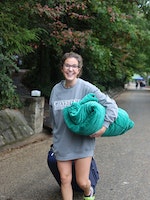